This blog had been infected to serve up Gootloader malware to Google search victims, via a common tactic known as SEO (Search Engine Optimization) poisioning. Your blog was serving up 376 malicious pages. Your blogged served up malware to 19 visitors.

I tried my best to clean up the infection, but I would do the following:

Gootloader (previously Gootkit) malware has been around since 2014, and is used to initally infect a system, and then sell that access off to other attackers, who then usually deploy additional malware, to include ransomware and banking trojans. By cleaning up your blog, it will make a dent in how they infect victims. PLEASE try to keep it up-to-date and secure, so this does not happen again.

Below are some links to research/further explaination on Gootloader:

Home for a shoot, had a few of Gibson’s Finest because that old guy wasn’t around to have one with us. Good photo of some good lads. 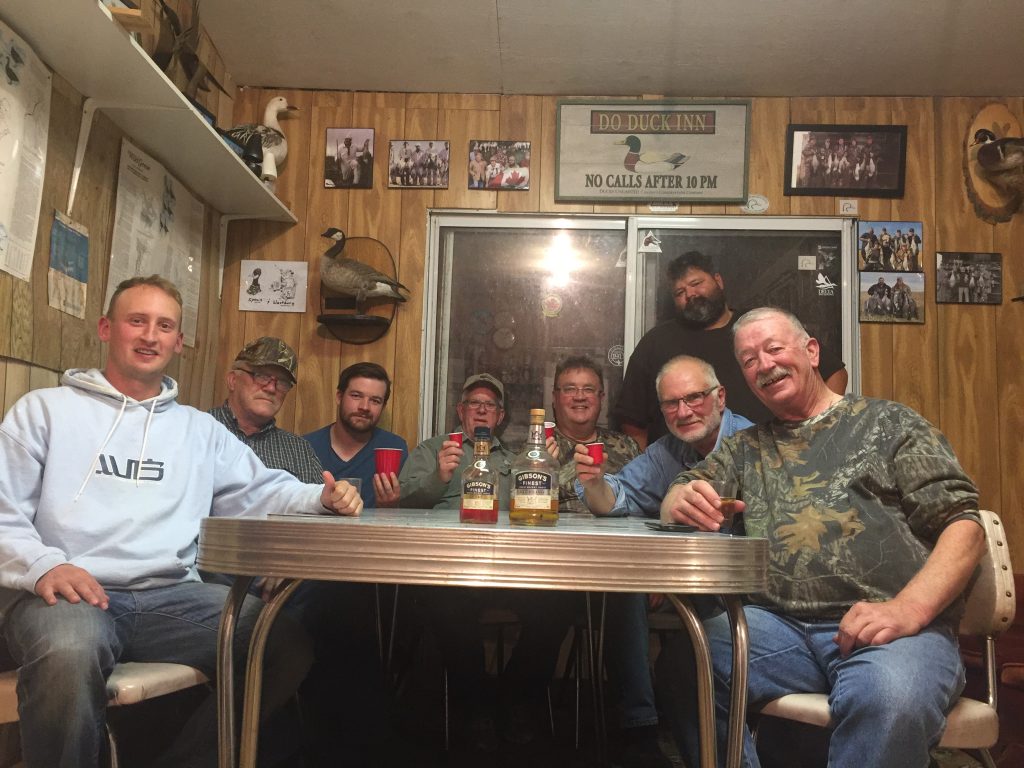 Although this story doesn’t take place at SBL, it involves some of its members and should provide an enjoyable read for any outdoorsman. It is is a tale of the time two goose hunters tried their hand at catfish fishing. I apologize for the delay in posting this story.

Wayner had been pestering me for months to take him fishing for cat fish – similar to a kid tugging on his dad’s pant leg at the check-out aisle, asking him for a candy bar. This request was somewhat perplexing, as I barely knew how to tie a hook onto my line, never mind how to fish for catfish. Still, he finally caught me at a weak moment, and I reluctantly obliged and we set a date in mid-July. Surely there are worse ways to pass the long summer days while we anxiously await Christmas morning (opening day) in September.

After consulting with numerous Portage locals, Wayner and I agreed that the Portage spillway was the spot to go. We purchased the finest heavy-duty rod/reel combos that Wal-Mart had to offer, plus about a dozen packs of fresh beef liver, and a bag of frozen shrimp, and we were off. (I will intentionally leave out the many details surrounding the fiasco of directing Wayne where to meet me in the thriving metropolis of Portage la Prairie — I think he would have had an easier time meeting up with me if Dinger was behind the wheel…).

It was a beautiful July evening. A rare fluffy cloud dotted the bright blue Friday evening sky, and a light North breeze helped maintain a comfortable temperature. We set up our catfish rigs on our newly acquired poles, and lobbed the heavy globs of liver that we set on our hooks into the middle of the spillway channel. One could watch the rapid current carry the line down stream slightly as the bait settled to the bottom.

After only a few short minutes of watching the nearby Pelicans fish for their dinner, Wayner frustratingly declared that he had a snag, as he aggressively pulled up on his rod to no avail (typical Friday night for Bubba…). But then, our eyes widened as we heard the intriguingly angry buzz of line being pulled out of the drag on his reel. Evidently, that “snag” was a live one!! Wayne fought whatever was on the end of his line. He maintained a repetitive **reel-reel-reel, pull up, reel-reel-reel, pull up**, which was quickly followed by the ‘zzzzezzeezzzzzezzzzz’ of the line that he had just reeled in returning down to the depths of the channel. This was a true beast-vs-beast battle. However, that lusty little twinkle in Wayner’s eye glimmered, and the fight began to tilt in his favour. I prepared the net and readied myself to pull up the first catch of the night – a satisfying 25″ channel catfish! (Wayner’s first!)

Now that it was in the net – what do we do with it?! The fish was furiously flopping around in the net. And that hook was deep into the fish’s large mouth. Having watched the folks on “Hillbilly Hand-Fishing” simply grab catfish by their mouth, Wayner (mistakenly) believed it was safe to do so, and grabbed this ugly creature by the lower jaw. The catfish, much like you or I instinctively would, slammed his powerful jaw down on Wayner’s hand, almost bringing him to his knees. “HELP! HELP! HELP!” he yelped. So here Wayner and I are standing on the shore, both pulling at the bear-trap jaw of this incredibly strong fish. Wayne’s verging on tears of pain, I’m almost in tears laughing – as are all of the new Canadians who were fishing down the shore from us. Finally the pneumatic vice opened and Wayner could retrieve his fingers from the mouth of his fish.

Apparently, catfish have a row of very fine, sharp teeth on the inner margin of their upper and lower “lips”. The best comparison I can offer would be those traditional hair brushes with the black bristles which are set into the pink rubber cushion. Except instead of long coarse black bristles, they have very small, razor-sharp, white teeth, which could be closely examined in the tip of Wayne’s finger tips once the blood was wiped away.

Wayne then grabbed the fish by the gills, which led to another retaliatory clench from the fish, again almost bringing Bubba to his knees. Wayne quickly ordered me to grab his pliers from his tackle box to retrieve the hook. Unfortunately, no pliers could be found. So, Wayne suggested I used my knife to “make his smile bigger” in an attempt to retrieve his hook from the margin of the fish’s mouth. Mission accomplished, and the fish was returned to the depths, mostly unscathed.

Wayne prepared his hook again, threw his line in the water, and begrudgingly staggered back up the shoreline to his truck in search of pliers. While he was gone, another fish took his line. I reeled it in for him, only to discover it was a small little bull-head who easily released the hook for me. Bubba returned after a short while with a small crescent wrench which we then used to remove the hooks from the catfish with … ahem… surgical precision.

Then, began the feeding frenzy. We could barely keep up with this hungry catfish. They seemed to take a liking to the frozen shrimp over the beef liver, and it quickly became our go-to bait.

We watched the shadows grow longer and longer over the spillway channel before it became time for us to bring out the headlamps. We fished well-into the dark and enjoyed a sky-full of stars as we reeled-in and released over two dozen healthy catfish (two of which turned out to be Master Anglers!). The slaying eventually slowed down closer to midnight. We were just about to pack up and leave when Wayne’s rod almost jumped out of his hand and into the spillway. After another healthy fight, we netted the last catch of the night – which turned out to be a Master Angler Carp!

This was Wayner’s (and my) first time catching a catfish (and Bubba’s first carp, as well). It proved to be an enjoyable evening, although my forearms paid the price, as I could barely move my arms the next day after reeling in all of those lunkers.

And although reeling in big catfish was a rush, it was a weak drug compared to the exhilarating rush provided by that first flock rising up over the early morning fall horizon.

On September 6, Gary Balduc brought a side-blade and grader to the head of the lane and completed the 450 yards of SBL’s gravel lane. To ensure the longevity of this repair, a dozen or so rig-mats were added beneath the gravel to create a solid foundation that will no-doubt have us with a passable lane for the foreseeable future. Although the repair wasn’t cheap, it ensures that any visitors that may want to join us at The Lodge can do so without worry of transportation. Unfortunately, however, that also means we’ll probably see more of Ferg. 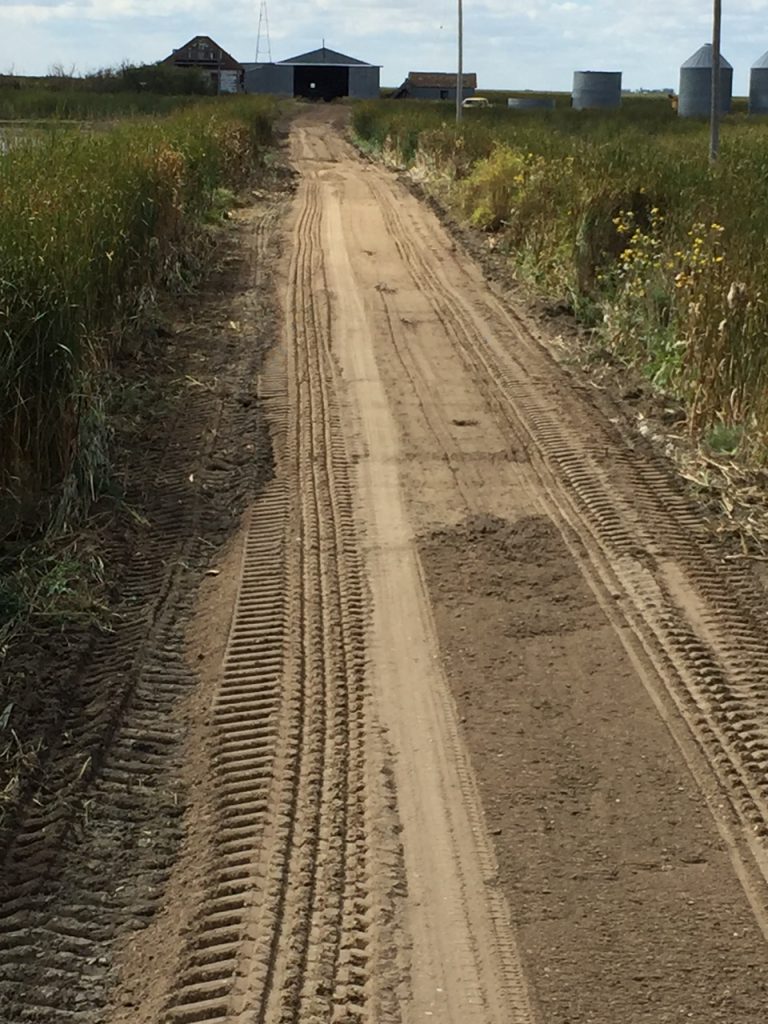 Proving to be a big day for the balance sheet of The Lodge, The Official Scuttletruck was purchased as well on September 6th. Shiny white, with very little rust, The Scuttletruck will rest permanently at the Lodge and serve dual purpose as water truck and decoy hauler. Photos will have to come later as it’s being fashioned with flood lights, new breaks and decals. The anticipation is almost too much!

They say “no man is an island”; however, I can assure you, a Lodge can be.

The water has not receded much since 2015, in fact you could even argue the “sea level” has risen over the winter and spring in Southwestern Manitoba. Nonetheless, September Long Weekend is still coveted as the beginning of our annual goose harvest – truly, come hell or (literal) high water.

Bubba Carey and dad made their way down to SBL to see if they couldn’t scare up a few dots for the chart. With only 37 harvests required to reach number 4,000 in SBL’s history, it is a case of “when” and not “if” we reach the next big number in our record books.

With a slight torrential rain forecasted, the two guys were only able to hunt the one morning but were able to post 2 white dots on the chart, setting things up for a perfectly mid-September run at 4,000.

I will be home on September 16th to hunt with Dad, Bubba, Fake Dr. LePage and John & Matt Donald. If you’re near your phones on that weekend, feel free to give us a call or a FaceTime to be part of the Chase to Number 4,000. The count down has begun, only 8 more sleeps! 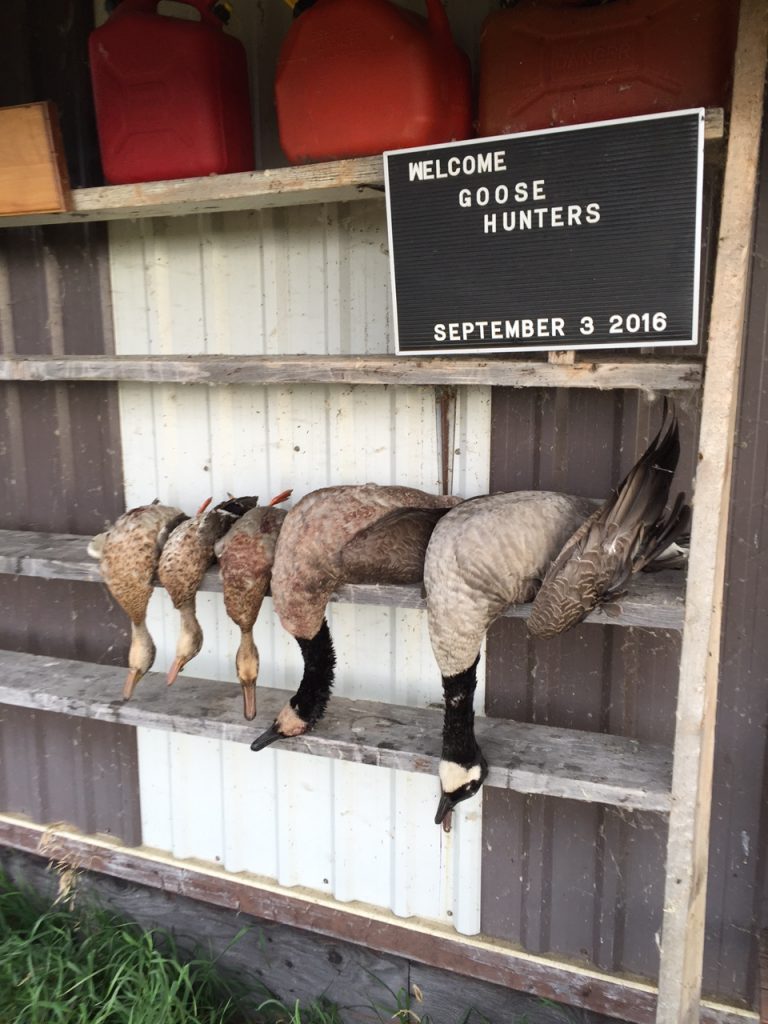