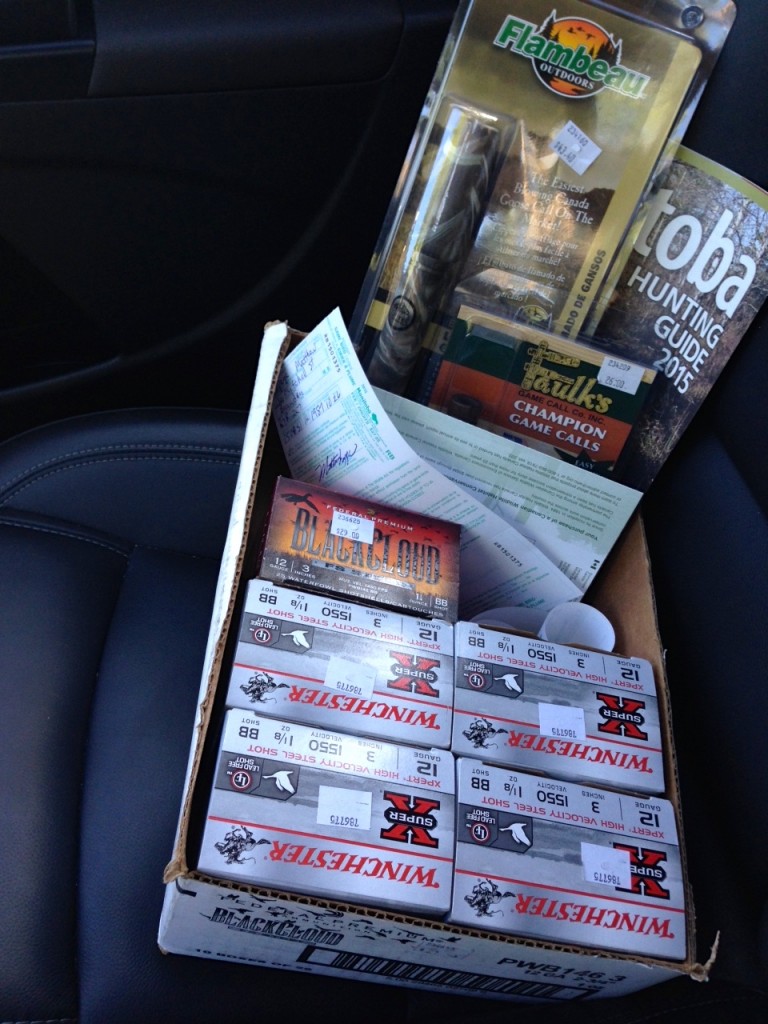 Some mornings you get in the decoys and everything just works. The birds fly the right line, they see your decoys early, the wind blows consistently in one direction, the cloud cover stays late in to the morning, and everyone is hidden perfectly.

Then there’s the opposite.

September 4, 2015 Wayne Carey, Matt Lepage, Brock Bastone, Andrew Johnston, Riley Wallace, Hunter Wallace and myself made our way down to Scuttlebuck for opening day of 2015. With Andrew and I coming from Calgary, our weekend was really left in the trusting hands of Big Wayne Carey – trusting as long as you’re not a sandwich that is.

With opening day being so early now, it’s very rare to even see any snow or blue geese. As expected, the scouting report had zero snows around but about 1,000 honkers and 15,000 ducks all over the fields near the lodge. With the flood waters of 2008 still not receded, we would be forced to venture a mile or two north of the lodge where the barley fields are plentiful this year.

Every bird on the planet was funnelling in to the Balduc half section 1 1/4 mile immediately north of SBL’s lane on the east side of the road. For those familiar, it’s the half section the two metal bins have sat in for the last 35 years. 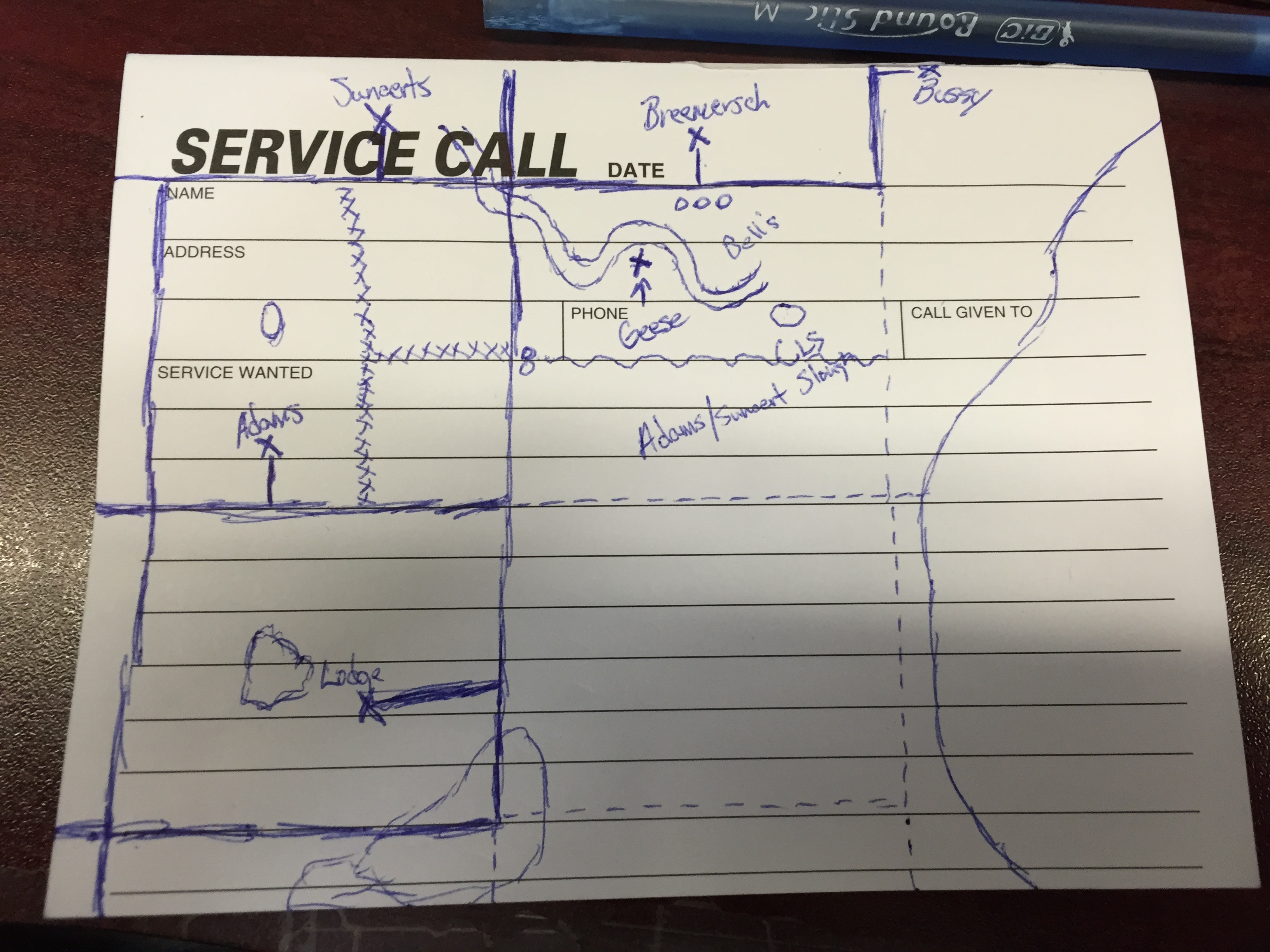 Unfortunately for us, the Adam’s family (not The Adam’s Family) was farming this section this year and were going to hunt it themselves so we were immediately thrown a curveball and forced to search elsewhere. While I went out to fire a few shots with the Wallace boys (pic below), Andrew and Wayne ventured to the south side of the lake to see if anything made its way over there.

Somewhat surprisingly to all of us, about 400 honkers had found their way immediately south of the lake, only 1 mile east of the ‘S’ pattern in the road on the south side. For those of you following along at home, it was here.

A barley field with a significant north to south incline, the honkers were piling in the filed for more than two weeks according to the land owner “Tudd”. Our plan was to go in the northwest level-crossing and travel about 300 yards south along the fence line and set a 7 man willow blind near the middle of the field. In fact, it’s pretty darn close to the pin in the map above.

The forecast was for a northeast wind and when setting up an immovable willow blind, the wind direction is pretty important. Luckily for us, weather men are rarely wrong.

We arrived around 5:45 AM and with after 15 minutes of bickering, Wayne and Andrew had decided on an all full-body-honker spread on a large ridge in the middle of the field. Shaped like an X with two extended arms (more like a chromosome really), the 7 of us got in place just as the sun started to rise behind us and the waiting game began. Within minutes of sitting down a pair of mallards came in and landed in the decoys about 5 yards from us. This was a good sign.

The weather was really strange with a severe lightning storm ongoing just west of us, buckets of rain pouring down north of us, and in the middle the 7 of us in t-shirts at 27 degree celsius. Then it changed.

With a huge smash of thunder and flash of lightning, the temperature instantly dropped 20 degrees and the wind, rain, and birds all started to frenzy together. With us facing almost directly west, the first few flocks came in perfectly and we knocked down a few in the first volley. Now the rain was really making things difficult as the water started to pool at our feet making movement a bit more tricky in such small quarters. As Murphy would dictate, the wind flipped-backwards mid-flight and the birds immediately responded by going around us and landing in-range but directly behind us.

After a quick discussion with Bill Jr., we both bolted from the blind in a dead sprint and started throwing decoys to the south in hopes of guiding the birds in front of us instead of around the backside. Giving the downpour, 50 MPH wind and slope of the barley field, this was no easy feat.

With the new spread designed and Andrew and I back in the blind, no sooner had the next flock approached when the wind chose it’s third direction of the morning – straight north. It doesn’t take Pythagoras to understand that 7 guys in a line facing west would have some difficulty shooting birds approaching from the south.

The first southern volley knocked down 3 good sized honkers (2 of which glided – must have been Jago who shot them), and left us all with ringing ears and headaches. Andrew and Basty went on the chase to pick up the 2 cripples and immediately dropped to the ground as another flock of twelve circled up and came our direction. With Wayne manning the goose calls, and me feebly trying to flag in 30 MPH wind, the four bottom geese cupped up and committed to our spread. I don’t recall any of them being particularly large in appearance which is strange given what happened next.

When Bubs yelled, “Kill em'”, Jago, Wallace X2, Bub and I popped up and hammered on the four lower honkers crumpling the southern most birds and getting a delayed kill on a third. With Andrew and Basty laying out in the field – separately I should clarify – I was the next in line for retrieval. I immediately grabbed the leg of the first bird that lay dead about 8 paces from the blind, and quickly picked up the second about 10 paces north of the first before sprinting 30 paces to the third that had fallen slightly down the hill north of the blind. With birds coming again, I ran back to the blind but not without noticing the foot in my hand to be remarkably close to the size of my hand!

As I ran back to the blind, I could feel the compound fracture in the bird’s wing against my knee as I showed Wayne, “This one is a pretty good bird”. Without much thought I threw the birds behind the blind and clambered back in to the blind in time for the next volley.

The action lasted another hour or so and with a booty of 18 opening day honkers, we took a field photo and headed back to the lodge for a much needed nap. As is customary at SBL, Andrew grabbed the Guest Registry and started to weigh and record the Honker Harvest from the morning.

With the first few ranging from 9 to 11 lbs., the fifth one weighed shocked everyone, especially Andrew, the owner of SBL’s largest goose ever. 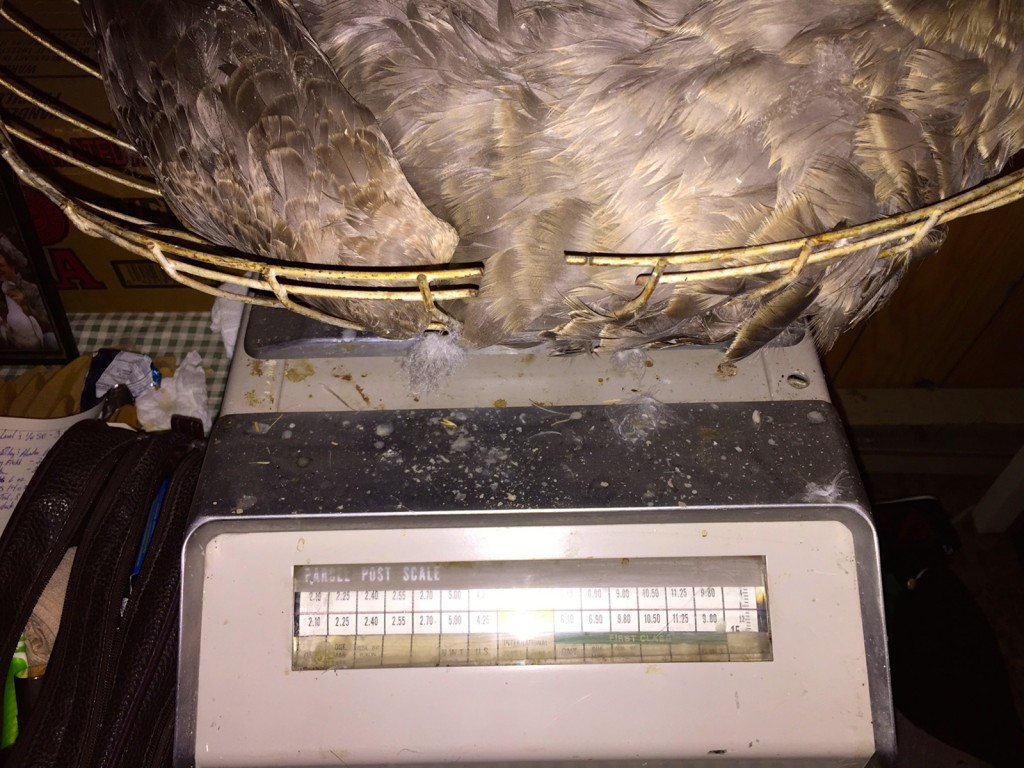 Fourteen pounds, eight ounces. How is that even possible? Believe me, it is. We weighed it 4 times, on 2 different surfaces, 5 hours apart. It’s true, there’s a new King in town. The amazing part is that none of us even knew which of the birds it was when we shot it. You’d think an absolute monster like this would have stuck out in the air, but it didn’t. At least I don’t think it did. Between the lightning, thunder, rain, wind, backwards decoys, sideways geese, more rain and thunder, it all kind of became a blur. Everything except one detail – the compound fractured wing that rubbed against my knee. 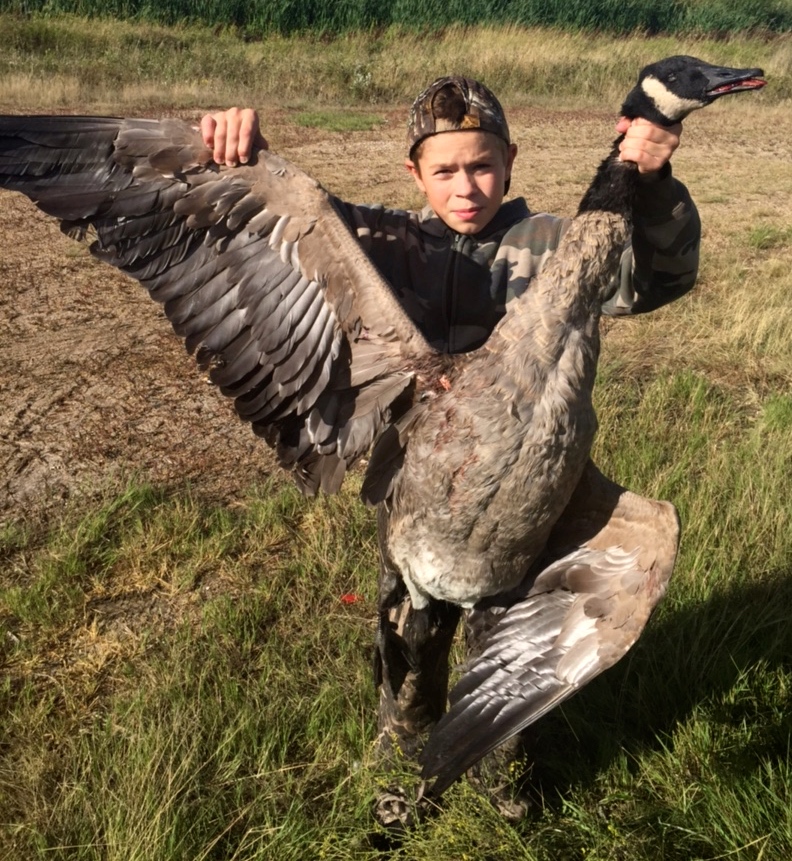 I honestly don’t have a clue who shot it, but I know it was one of the two birds I picked up immediately in front of the blind on that volley. His feet looked like a pterodactyl’s and had a big mallet head like we’ve become accustomed to seeing. And who shot it doesn’t really matter in the end as most are group efforts anyways. The important thing is there’s a new Sheriff in town, and a new goal to achieve. 15 lbs. is coming, it’s not “if” but “when”. Dad’s bird from 1997 still gets my vote as the most impressive (15 years as the biggest, and by a two pounds at least), but Andrew’s monster from a few years back was also incredible.

A hell of a way to start the year. Will ’15 be the year of the 15 lbs? I think yes, but you’ll never get it sitting there now will you. 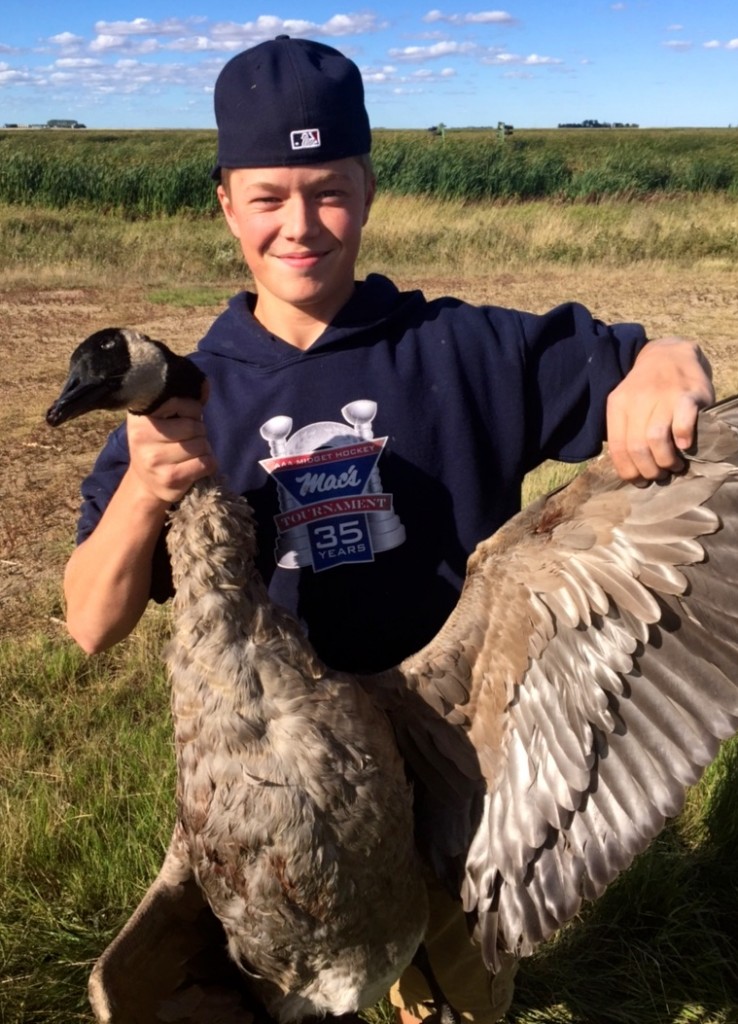 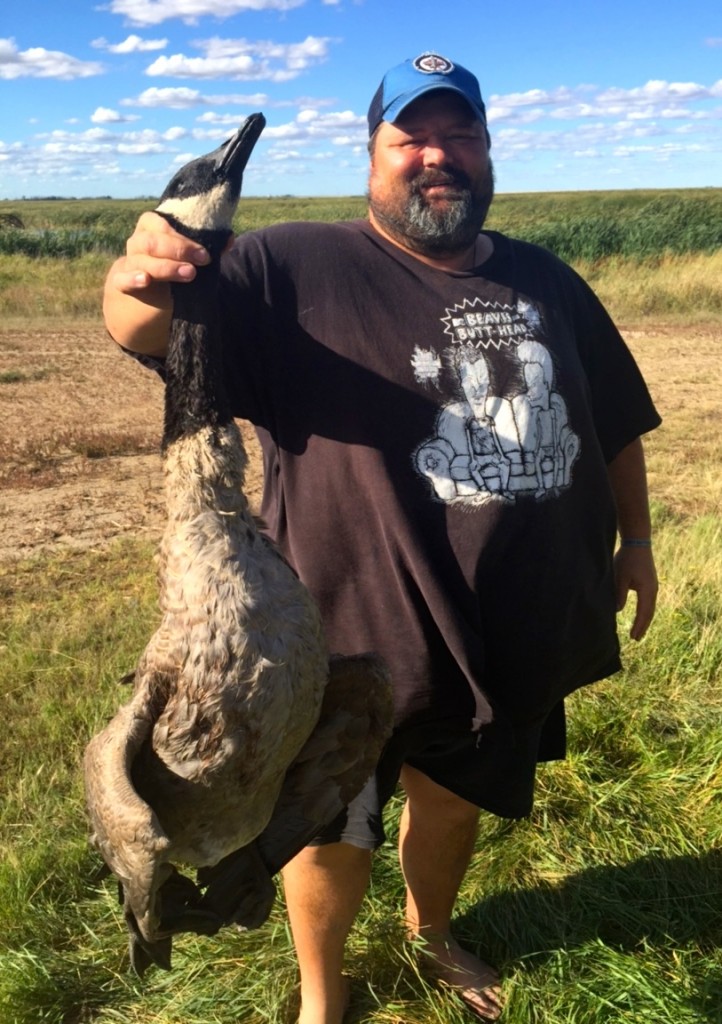 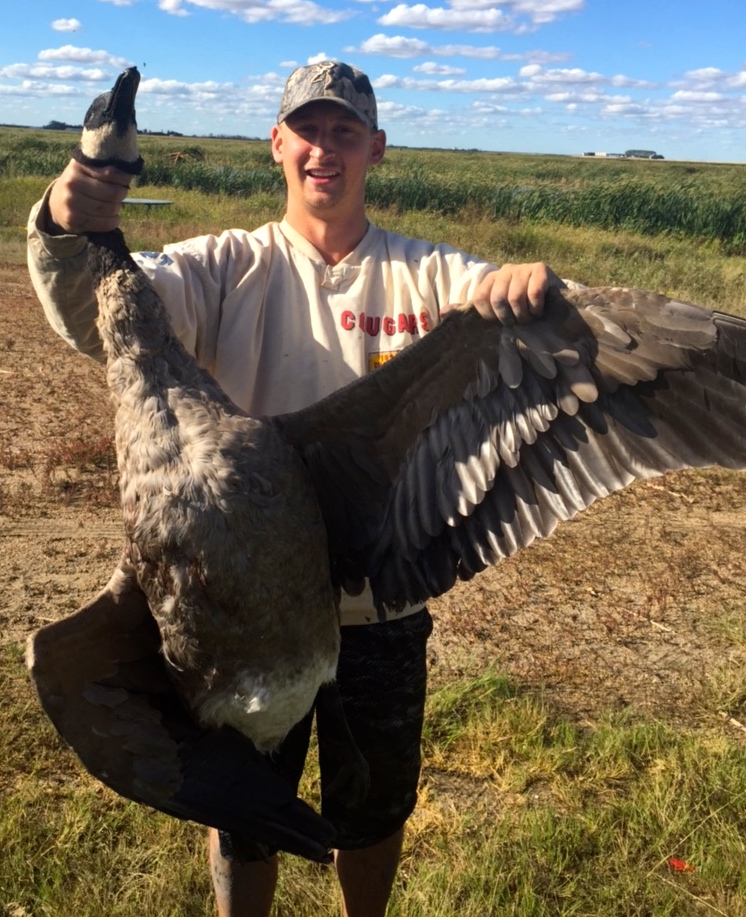 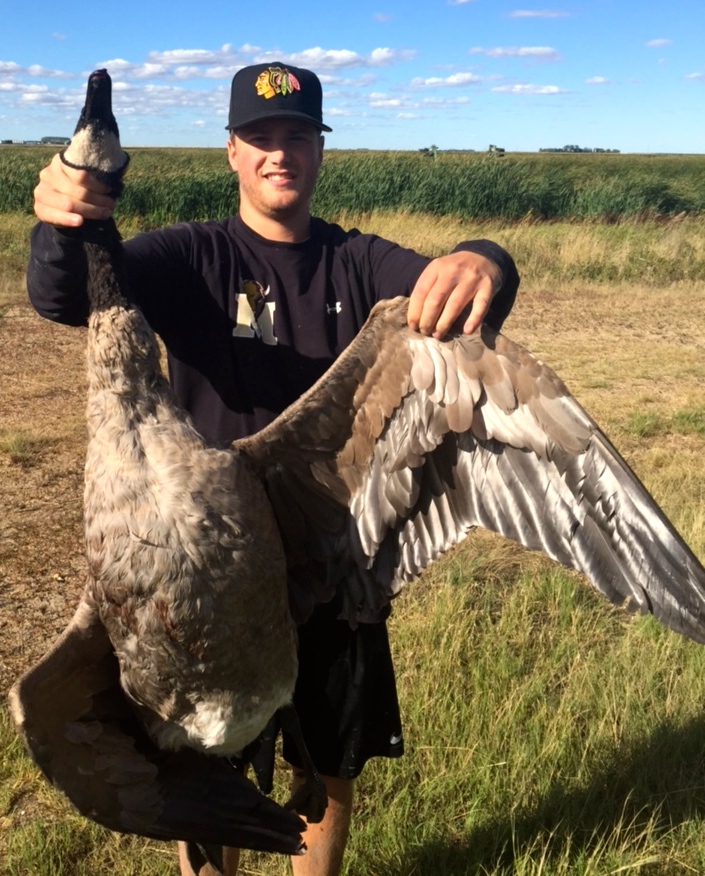 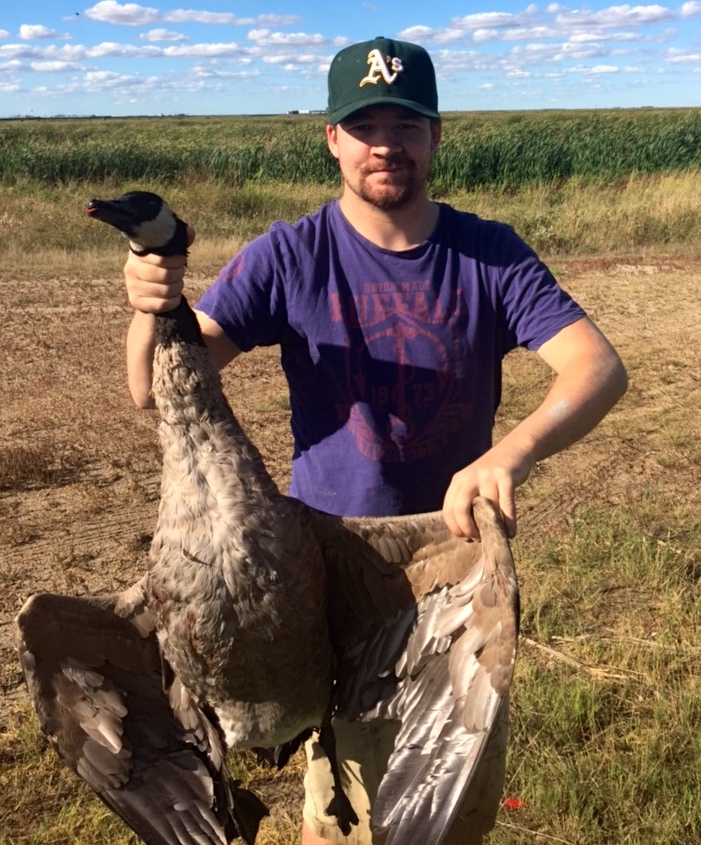 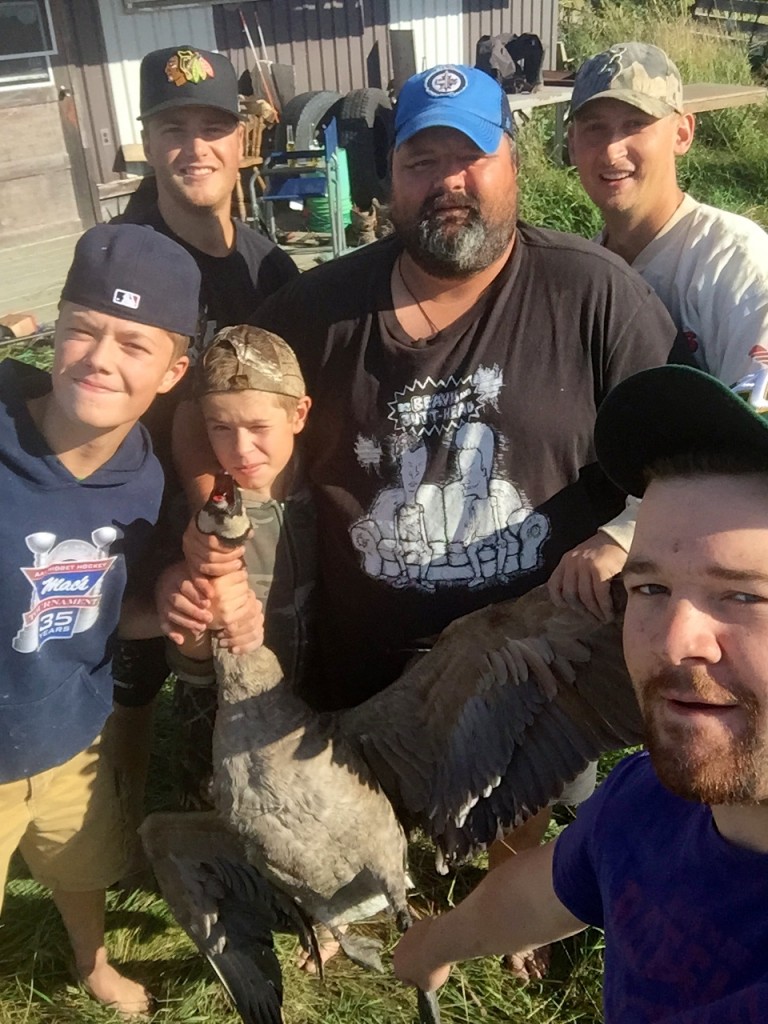