This was very nearly a hunt that didn’t happen. Not only is hunting in November much colder than most goose hunters care to endure, but it is also a much shorter day, with very few daylight hours to work with. With Uncle Bob et al, in Jamaica for Keely and Eugene’s wedding and most others having packed up their hunting supplies for the winter, this weekend was left to just Big Wayne Carey and myself. Leaving Brandon immediately after work, around 3:40 pm or so, we were rushed to make the hour drive in enough time and daylight left to have a plan for the morning.

We first pulled through Elgin at just before 5 and spotted what days before had been filled with snow geese to be bare and white with just snow. Across the road held our best opportunity to this point at somewhere between 12 and 16 honkers nearly 20 minutes drive North of the Lodge. We soldiered on. After hopelessly checking our best guesses as to where there may be geese, and light fading fast, our last stop was at the burnt barley on Barry Janssens’ on the North lakeshore. As we pulled in, kitty-corner across the road towards Richard Sexton’s home, we spotted nearly 200 November honkers. This was something we couldn’t pass up.

The next morning we dispersed close to 50 decoys and our 2 goose chairs, and hid the truck in a pump jack driveway about 200 yards away. As I walked in from hiding the truck, Wayne had what was surely a surprise. 11 snow geese quietly approached the decoys and caught our not-so-nimble colleague off guard! Not to worry! They’d be back.

Hid in our chairs, and calls and flags at the ready, the first group of Canadas came to us from completely the wrong direction. They spun and worked us and circled and circled and eventually tried to land to our left, we shot out 6 pops and got two, but were very worried that this may be the way the morning played out. We pulled back the legs from the front of our “V” of decoys and created what was basically a straight line across the front of our decoys. This we hoped would get the birds all the way to us at least, if they were going to be hesitant.

Our first flock off the lake headed out our way, but they drifted a little West and looked like they may go out around us. We called and flapped and it showed great impact as it drew the birds to us, they centred up and we got 4 on a pretty good chance. The next flock out tried to land behind us, and on this chance we got 3. What had started out a little sketchy, had turned out great to this point, and with the overcast skies turning to snowfall and a stiff North wind, even the weather couldn’t have been better.

As soon as you thought that, of course, a truck pulled up. Right to the intersection 100 yards from us and stopped, watching us, clearly unsure if we were geese themselves, or the decoys we were. We didn’t do them any favours as we laid still and waited for our next chance. Then as luck would have it, when the next flock out started off further West and surely to miss us, this truck pulls down the turkey trail toward the lake and parks 500 yards in front of us. Instant rage pours out of Wayne and me, but the passengers of the truck never did get out, but they did turn the flock right towards us.

Now is where it got fun. In seeing this flock approach, one thing caught my eye, a long ways out. The lead goose of this flock was a monster, a clearly superior bird to the rest of the flock. Shortly after the scare with the truck, this flock straightened up and came in as though they were being reeled in on a string. We waited, and called, and once it was time we popped up and gave them six. 5 birds came crashing down, including the big lead goose. I will never forget Bubba’s cry, “HELLO WORLD!” moments after we shot, and I couldn’t contain my excitement. I was up and dancing around yelling, “I GOT THE BIG ONE! I GOT THE BIG ONE!”. This was a moment of sheer ecstasy for the pair of us.

With 14 in hand and a serious need to weigh them Wayne set off for the truck and I began collecting the decoys. We thought a limit would be nice, but this was a hell of a shoot. I swear I was all but finished cleaning up the decoys and Wayne was halfway back with the truck when 10 more honkers glided my way. Scrambling, I grabbed my gun and gave them three shots. The two closest geese fell, neither very dead, but we had our limit. Wayne threw the last few decoys in the truck and drove out to pick me up as I collected the last two sailers. We had our limit.

My goose weighed in at 14 lbs 7 oz, and is currently the new #1 biggest goose in Scuttlebuck’s history… For now. 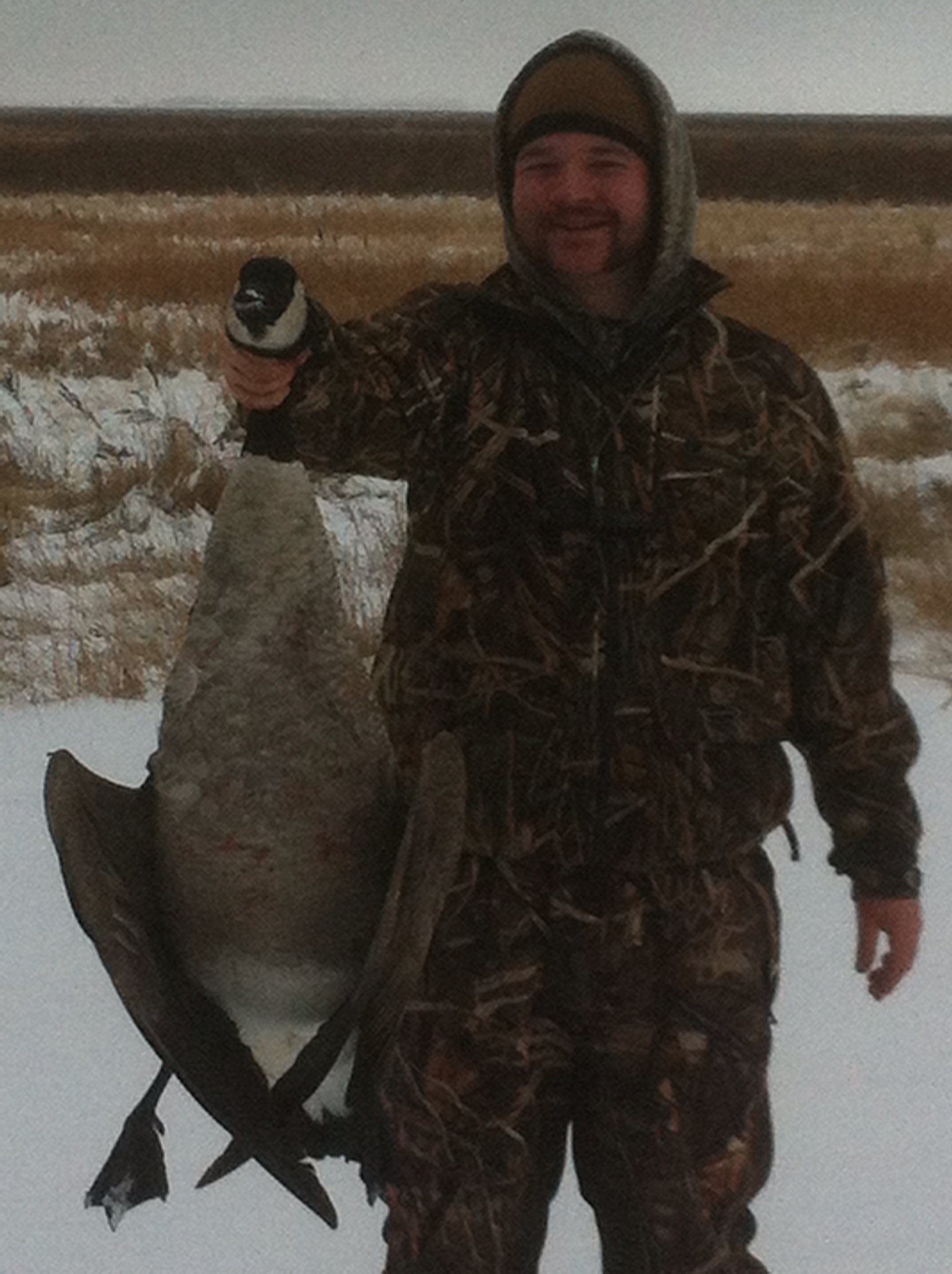 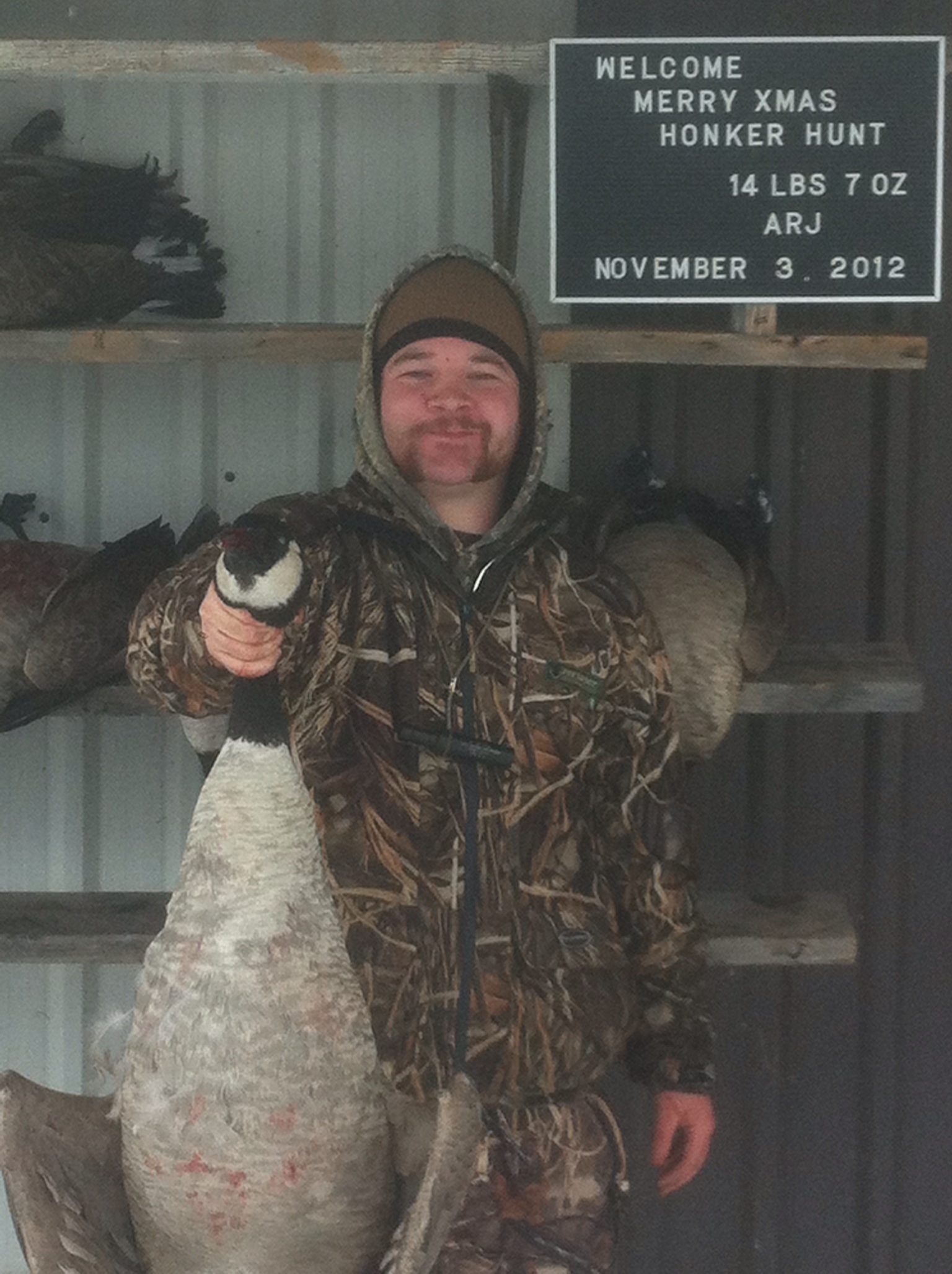 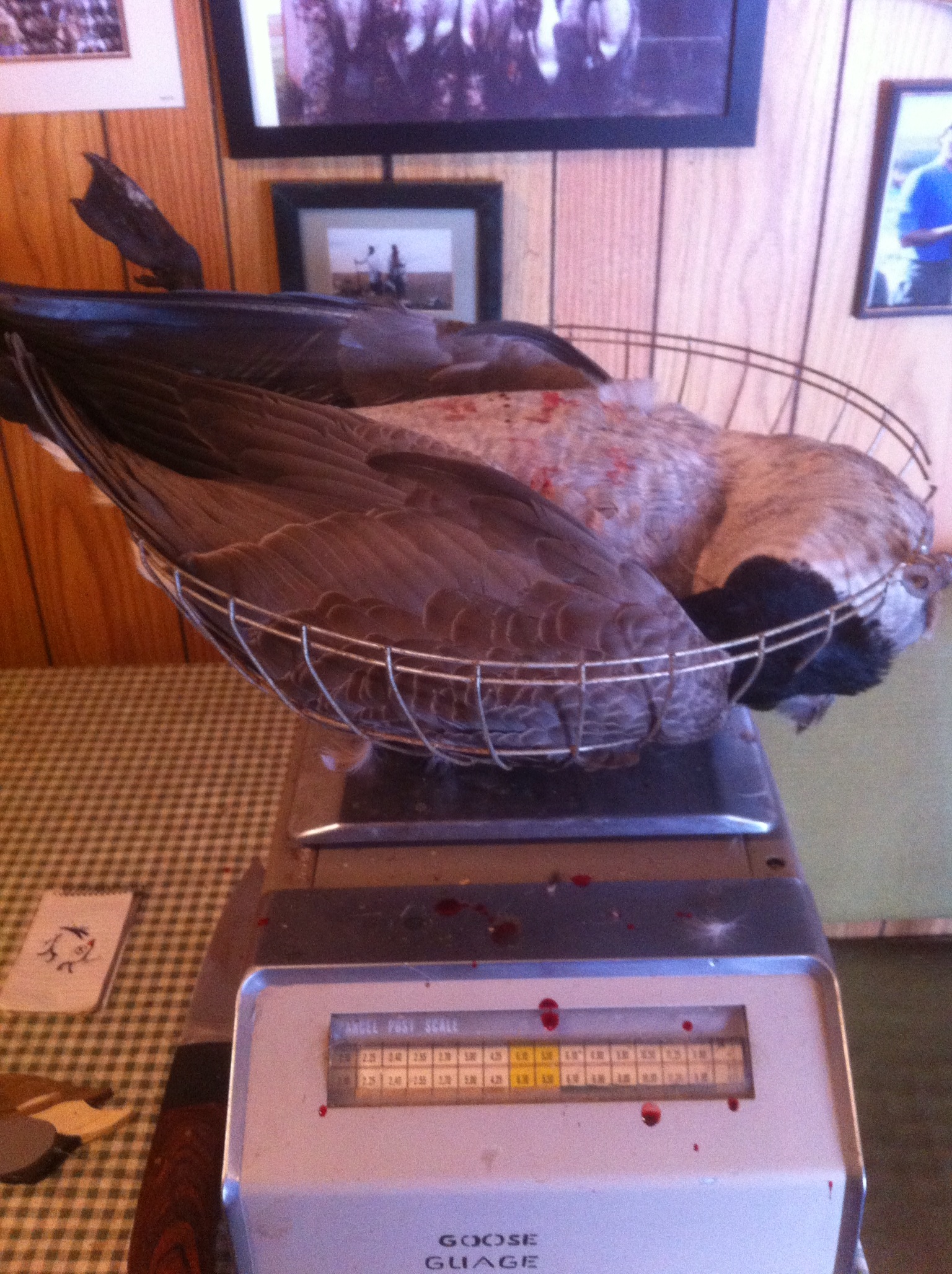 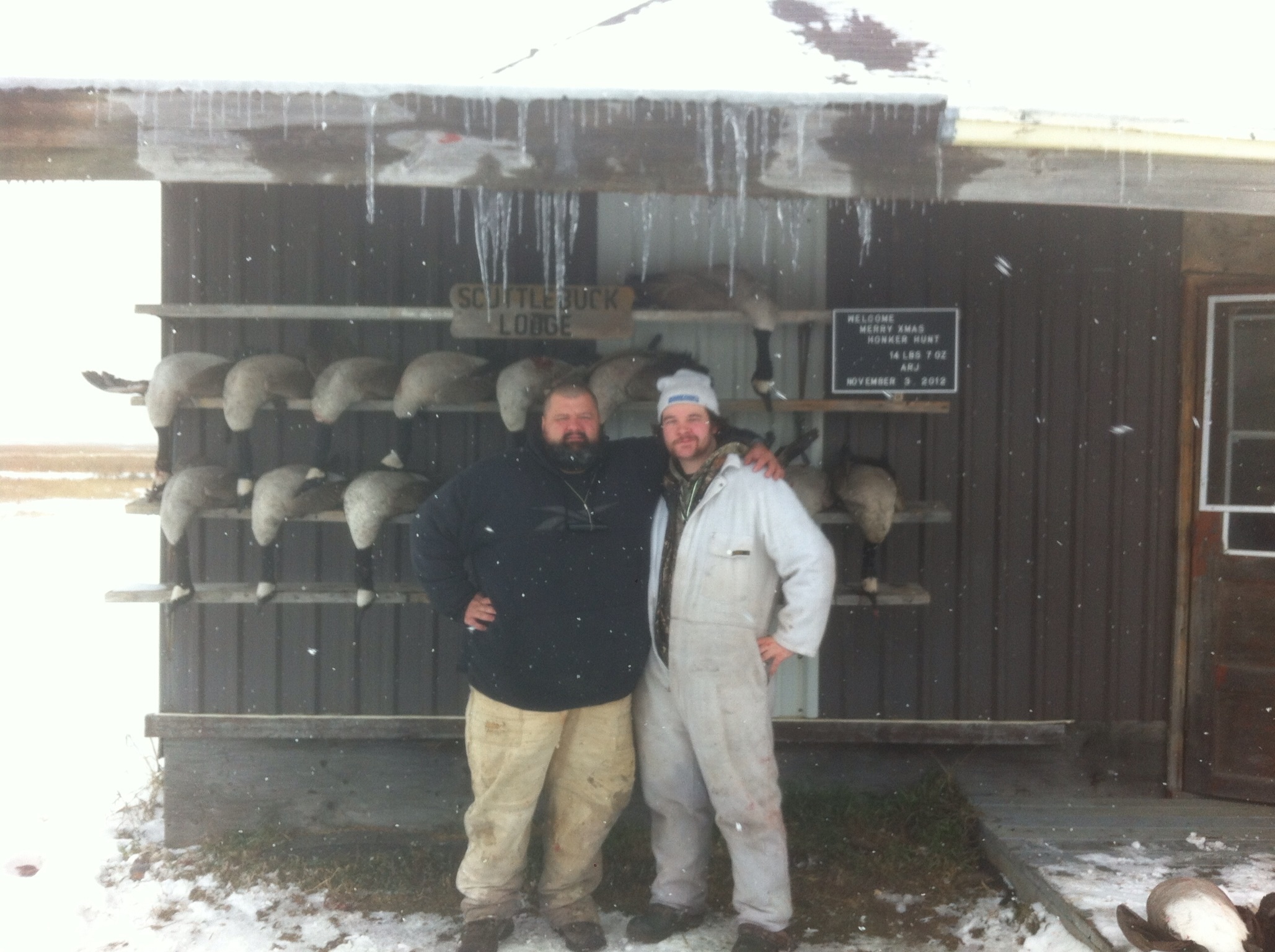