It was a little more low-key this weekend, with most of our regular members tied up with other engagements. The Lodge was inhabited only by myself, Dinger, Bubba and my friend Jordan Seafoot. Actually, we were joined by Dr. Matt “Saw McGraw” Lepage as well, early Sunday morning. PS- For those wondering, yes, he is a doctor. An optometrist, not a real doctor.

On with our story.

Unlike most weekends, this one started out with a major hitch to say the least. It rained for four days heading into the weekend, and with no sun or wind to speak of, the stubble fields were too wet to head into for a morning shoot. Not that we thought of that before we tried. So at 5:15 am we spent 45 minutes trying to decide how and where we were going to enter the field we had permission in for our hunt. We decided to go home…. So by ten after six we had four gentlemen up and about ready to seize the day, and nothing to do. So coffee and Caesars were poured, and crib (our usual evening passtime) was played.

With the sun rising at about 7:15 and our card game finished, we headed out to get Big Seaf under a goose. Our best options were again stymied by dampness, but we did manage some shots off a road at some high cacklers to no avail. We headed back for what we all really wanted, a Lodge breakfast, followed closely by a Lodge nap.

Buzz, Buzz, Buzz.. These sound effects symbolize two specific things. One: my alarm clock saying its time to go set up for an afternoon shoot, and 2: the hilarity that is, Dinger can’t sleep because there’s too many houseflies. Awh, you gotta enjoy the little things. Back out to Adams’ pasture we headed!

Adams’ pasture is less than a mile north or the Lodge, which was a real convenience. We stopped in their yard for another quick chat with Brenda Adams, mostly to explain our absence that morning and our intentions for the afternoon, and with her blessing we headed through the yard (which it turns out is the only way into the field) around the tree-line to the field entrance and… BOOM! Our quarry was planted literally between the fence posts where our only entrance was. 150 or so honkers sat, grazing in what was hoped to be an empty field, denying us a stealthy set up for our afternoon shoot. With everything going against us so far, we deemed the best course of action to be; to walk off the geese in the least antagonistic way possible, to prevent spooking the birds too much and ruining our chances.

So with the blind constructed and decoys put out, it was time to park the truck, just before 5 pm. The usual flight time for the afternoon being just shortly after 5 we were convinced we had gotten it right. Little did we know, that with the birds feeding until 2:30 or so when we pushed them off, they were in no hurry to return to the field. Our hunt really didn’t start until 6:15, and with sunset being around 7:35 this time of year, that didn’t leave us much time. Our first flock out was a group of 8 or 9 blues, and with our set being all Canadas’, they didn’t work us perfectly but a strong west wind gave us ample opportunity to woo them to our spread. They came in, and we knocked three down.

The honkers worked us better, but with few chances and not an over-abundance of birds we had success, but limited success. Small groups came in and we knocked down our fair share. Fours come in, we’d get two. We essentially only had three shooters since I was spending most of my time shooting video for Lars while he was working. What’s family for right? On one particularly glorious opportunity, we had two honkers come right over the blind, and since it was Seaf’s first hunt of the season, we left this up to him. Two shots and two geese, but one came with a secret surprise. One of Jordan’s honkers turned out to be banded. Upon a more in depth search, it was banded a year earlier in Devil’s Lake, North Dakota.

Our shoot ended up a success, with 10 honkers, 3 cacklers and the 3 snows. Seaf shot the banded goose, and Dinger shot a 12 pound 14 ounce honker, good for 9th all time in Scuttlebuck history. 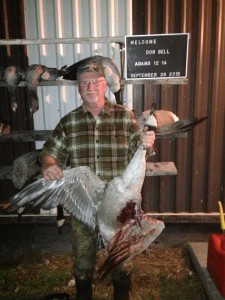 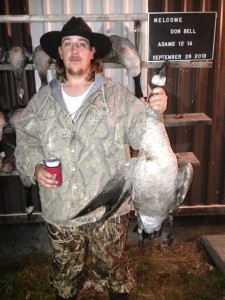 Dr. Saw pulled into the yard at 5:30 am and we were loaded and pulling out, trailer behind us, before 6. As we headed to another quarter of Barry Sunaert’s on the NW corner of the lake, we knew this morning would be an earlier one as the snow geese tend to leave the lake significantly earlier than the larger Canada geese do, so we hurried to get the blind and decoys set up by shortly after 7. 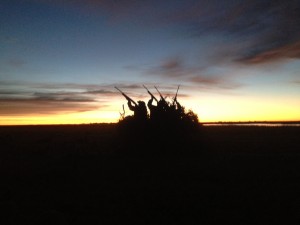 After taking that picture and just getting settled in the blind, we were greeted by the first goose of the morning. This is the goose I look forward to most in the mornings. I personally live for that first dopey juvenile blue to approach the dekes, whilst it’s barely light enough to see him. That’s one in the bag. The flight started soon after and the first group to the decoys gave us a great opportunity. 15 Ross’ geese worked our decoys, centring up and even demonstrating some acrobatics side-slipping a time or two as they approached. We gave them 15 shots from the 5 of us hunters, and six birds hurtled to the turf. The rest of the morning didnt amount to much as the flight passed us by, but we left the field content, with seven birds in hand, and a solid weekend behind us.

Interesting side note- This was the biggest harvest for the month of September in Scuttlebuck’s history, edging out 1993’s total of 184 birds.

Then the fridge endeavours and pics.

Execution: Slept in, used goose chairs and a layout blind. Put out full bodies. Forgot how to shoot straight.