On this morning, it was tougher slugging.
Although, it’s hard to complain about a morning like the one we had. 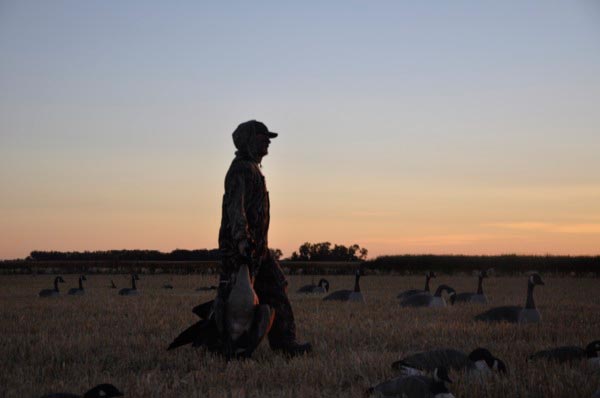 The trio of Johnston A., Johnston R. and Wayne Carey remained intact from the first morning, but were joined along side by the one and only Joss March. After blasting the geese out of Bolduc’s barley by 7:31AM the morning before, much of the afternoon was spent scouting for our Sunday destination. As much as we tried to get picked up and cleared out of the field without completely pushing the geese out, our attempts were in vain as there was nary a feather to be found in there that afternoon.

This led us to set up kitty-corner, across the road, on Janssens’ Postage Stamp barley. What we hoped was the same 500 Greater Canadas we’d scouted the week before appeared only to be 200 or 250 or so, joined, much to our delight, by 10-15 snow geese. This was the first snow goose sighting of the fall. Alas, our destination was determined to be here. With a quick phone chat with Barry himself, the Scuttlebuck hunting quartet was set for the morning. 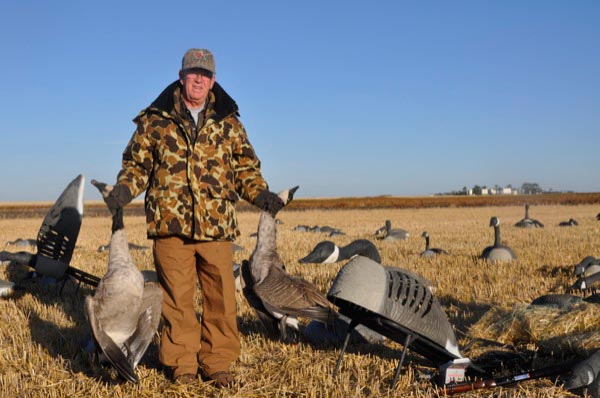 Loaded with a truck-full of decoys and four 12-gauges, we took to the field by 5:50 AM Sunday and dispersed our decoys. While the unloaded truck pulled out, the three remaining field attendants managed to knock down our first goose of the morning, an adult Snoss (Snow or Ross, this is still up for debate). This happened close to 6:35 AM – almost to the moment of legal shooting time.

With a slight south breeze and a cloudless sky, the hunters then waited as a fried-egg-sun rose in the east. The birds, on the other hand, had a lazy morning, flip-flopping back and forth from small puddle to small puddle – for what seemed like ages – finally venturing their way out to our spread shortly after 7. The first group out to the dekes was a flock of 9 Honkers. Looking frighteningly edgy compared to the ease of the previous morning, they locked and lowered down the right wing of the “U”, almost to landing height before they decided otherwise… Quick wing beats, followed by “Take Em!”, and two birds were down to be had. Morning count: 3.

Much to the hunters dismay, the geese coming out to our field this morning were few and far between. Similar to the first flock of honkers, small families of birds came and went, most leaving with less than the number they arrived with. We shot well on the chances that came our way, and by 9 AM we had our one snow goose and six honkers.

As you may know, honkers don’t follow the standard “out to feed early and back to water” rules that we, at Scuttlebuck, plan our days around while chasing the “White Devils”. It’s very common for the “10 O’Clock Honkers” to slip in silently, when the hunters least expect; or perchance, are preparing to end their morning escapade. This was the case this morning. With the hunters slipping into tired silence only ten minutes after harvesting a lonesome single Honker, the 9:30 Honkers cruised in, wing-tip to wing-tip, without a sound – and from the wrong direction. Almost along the ground, they swooped to the left edge of the decoys. Fortunately the Goose Boss expertly alerted the troops, and the boys managed to claim three of the five.

None of these flocks decoyed perfectly to any extent, but with some sharp wits and eyes, and some even sharper shooting, the weekends hunts concluded with a 10 honker, 1 snow and 2 mallard duck, morning. Season’s total now stands at 60 geese, with a long way to go and many hunts and memories to be had. Til then, ciao! 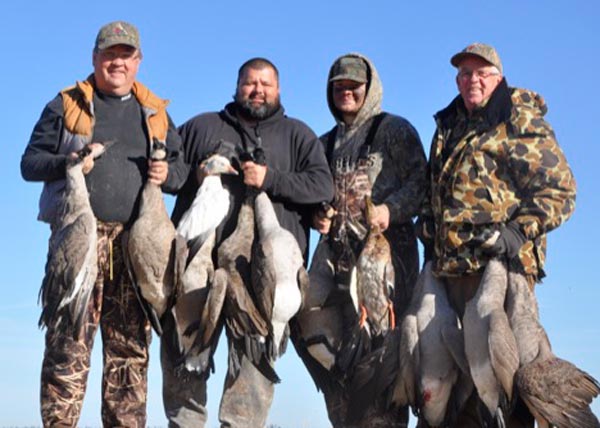