Forgive me for the tardiness (not to mention length) of this post. I promised Mini Billy Friar Johnston that I would post a compilation of my favourite Scuttlebuck experiences from last fall (2013). Given that it has unfortunately been several months since last fall, it is difficult to know where to start. Additionally, it would be very difficult to record ALL of my favourite Scuttlebuck memories in one entry. So, I suppose I will provide account of a day that is very close to my heart – the first time I laid a Canada Goose to rest.

Bill Jr. (Andrew) and I left from Brandon to the beloved Scuttlebuck lodge on a Friday afternoon in early September. As we made the final few gravel turns to the lodge, the sun was at the beginning of it’s descent. Andrew was listing off the landowner of every piece of land we passed, along with an amusing story about each of the said landowners (…sorry for the McDonald’s wrappers, big sexy).

Every body of water that we passed seemed to be a resting spot for hundreds of ducks and the rare honker. Since I was still waiting for the ink to dry on my recently acquired hunter’s safety card and migratory bird license, I had not had a chance to familiarize myself with the various species of ducks and geese.  Andrew rattled off identifying features and characteristics of seemingly every bird imaginable and was quick to point out different species as we passed. Finally, we pulled into Scuttlebuck (and were pleased to see the excessive rain as of late had not washed out the driveway). We unloaded the truck, made sure there were no blackbirds in the yard, and told a few pigeons to vacate the premises as well.

Mr. Bubba Carey finally showed up after we had put a case of BB’s through Friar’s beretta. We didn’t mind his late arrival, as he came bearing a hearty smile, and deer burgers!! We barbecued the thick venison patties and enjoyed some beans as a gassy side. A few Mooseheads topped off our barrels and we were off to bed – not before setting out our gear for the next morning, and finding a mice nest in the pocket of Andrew’s camo. This held a silver lining though, as Wayner had been wanting to practice hitting a pitching wedge through the open patio door for a while. A late addition to the group came after dark in the way of the wee pinap, Mr. Paul Johnston. The four of us found slumber (separately), and dreamt of the fluid wing beats and disorganized orchestra of Canadas on the horizon.

5:00am came VERY early the next morning. Perhaps if we spent slightly less time topping off with Mooseheads, we could have enjoyed slightly more rest. Either way, morning was here, and corporate roll-over was not an option. The previous evening’s scouting report indicated strong numbers near the dump field. Thus, we loaded up the decoys and headed southwest, racing against the pending sunrise.

It wouldn’t be a weekend at the lodge without careful deliberation between Bubba and Friar over what the most effective decoy arrangement would be. This was amusing for some, and visibly infuriating for others. I’m sure you all know who fell under that latter umbrella.

Once we had the decoys spread out to (some of) our liking, we found comfort in our goose chairs and pop-open blinds and began waiting for our bounty. The beautiful pink and then orange and then yellow sun began to rise, giving light to how clear the blue sky was that day. We exchanged goose calls with each other as we awaited the flight. This proved to be invaluable practice time with my new goose call.

Adorned in Lars’ camo (thanks Lars), and wielding Andrew’s beretta (thanks Friar), I found it difficult to fight off the adrenaline rush as the first line of birds was called out on the distant horizon. The slits on the goose chairs made visualization of the flock somewhat tedious, but their course of flight was definitely in our direction. Not seconds later, my excitement was quashed as a hunter down the line identified the flock as seagulls. This gave me a few more minutes to practice how I was going to operate a right-handed weapon as a left-handed shooter.

Finally, the unmistakable patterned wingbeat of Canada Geese appeared over Whitewater lake. It was go-time. Andrew alerted the geese to our spread with the flag decoy as the rest of us vocalized our location to the incoming party. *okay, right thumb safety off, right hand forestock, left hand grip, shoulder, align beads, trigger, trigger, trigger, reload, repeat*

As the flock neared, I was overwhelmed with how many birds actually approached. How was I going to pick one (or two?..or three??) to shoot??? There were dozens of them! Little did I know, this task would become much less cumbersome within the next 2 minutes. My excitement wavered slightly as the flock seemed to turn off just before reaching our spread. It was as if Andrew could read my thoughts of whether or not I could shoot that last, closest bird right then, as he instructed “waaaiiit…”. Sure enough, as if he had them on remote-control, they looped around us, “waaaiiit…” and came up behind us “waaiiit…” (I later realized that they prefer to land into the wind). I knew they were close, very close, “Waaaaiiiitt….” but didn’t want to turn around to see where they were, as to not spook them. “TAKE THEM!” I exploded out of my chair, right thumb safety off, grip, shoulder, align beads, and as if I was in a dream, an elegant honker was nearly motionless 15 yards in front of me, 5 feet off the ground, frantically flapping his wings in an attempt to escape my sights. Without hesitation, BOOM. My shock quickly subsided and I realized that I had hit it! I shot my first goose! I thought it was going to cry! Or maybe piss myself? Whatever that feeling was, it gives me goosebumps thinking about it again right now.

I jumped from my chair, one hand on my gun, the other held victoriously in the air. “I SHOT IT! I hit him! That one!!” It was then that I realized the rest of the group was still shooting. Not this guy. Thankfully the rest of the hunters were accurate, responsible shots and aware of my rookie status, as I was already a few paces into my retrieval. My initially short retrieval distance quickly turned into longer one as my prize was waddling through the stalks away from me. Hey! Wait! I shot that goose, why isn’t it dead?? This wasn’t in the manual.

I could hear laughter as I took after my goose, not entirely sure what I planned to do with it once I caught up to it. I caught distant instructions to “grab his neck!” Grab his neck?? Hell no. He’s pissed!!! (Granted, I would be too if some rookie shot me in the ass).

This small, 12 lb creature became surprisingly intimidating as he began hissing and flapping at me while walking in my direction. Briefly, the hunter became the hunted. However, another 3″ BB ended the reverse-pursuit pretty hastily. This day contained a lot of learning, as I was informed that a second, short range kill shot is a no-no, and makes for a messy clean-up later. But, the hunter jury was slightly divided on that…

I may have shot another small number of geese over the remainder of the morning, but who could care? I just shot my first goose! It might as well have been my limit, I was so content. The other hunters were clearly more lethal than I, as we were only a handful of birds from reaching our group limit after a couple of short hours. We decided to listen to our disgruntled stomachs, packed up our spread and our bounty and headed back to the lodge for breakfast.

The remainder of the day contained a Caesar or two, a few clay pigeons, perhaps a goose snooze or two, some tactful ribbing of the other hunters, a few ducks shot, a few more Caesars, a delicious dinner of wild game (prepared by Dinger in his smoker, who had arrived in the afternoon), a few more Caesars, and perhaps a Moosehead or two to top it off. It was safe to say, I had caught the Scuttlebug.

I enjoyed several lodge weekends after that one. My PAL had yet to arrive, so the Johnston’s, along with Wayner, always generously outfitted me for the hunt, and for that I am grateful. I have since added my first gun to my arsenal (a delightful left-handed Benelli Super Black Eagle II), and am very hopeful that I will be able to continue enjoying the Scuttlebuck experience for years to come. Also – shut-up, Dinger. 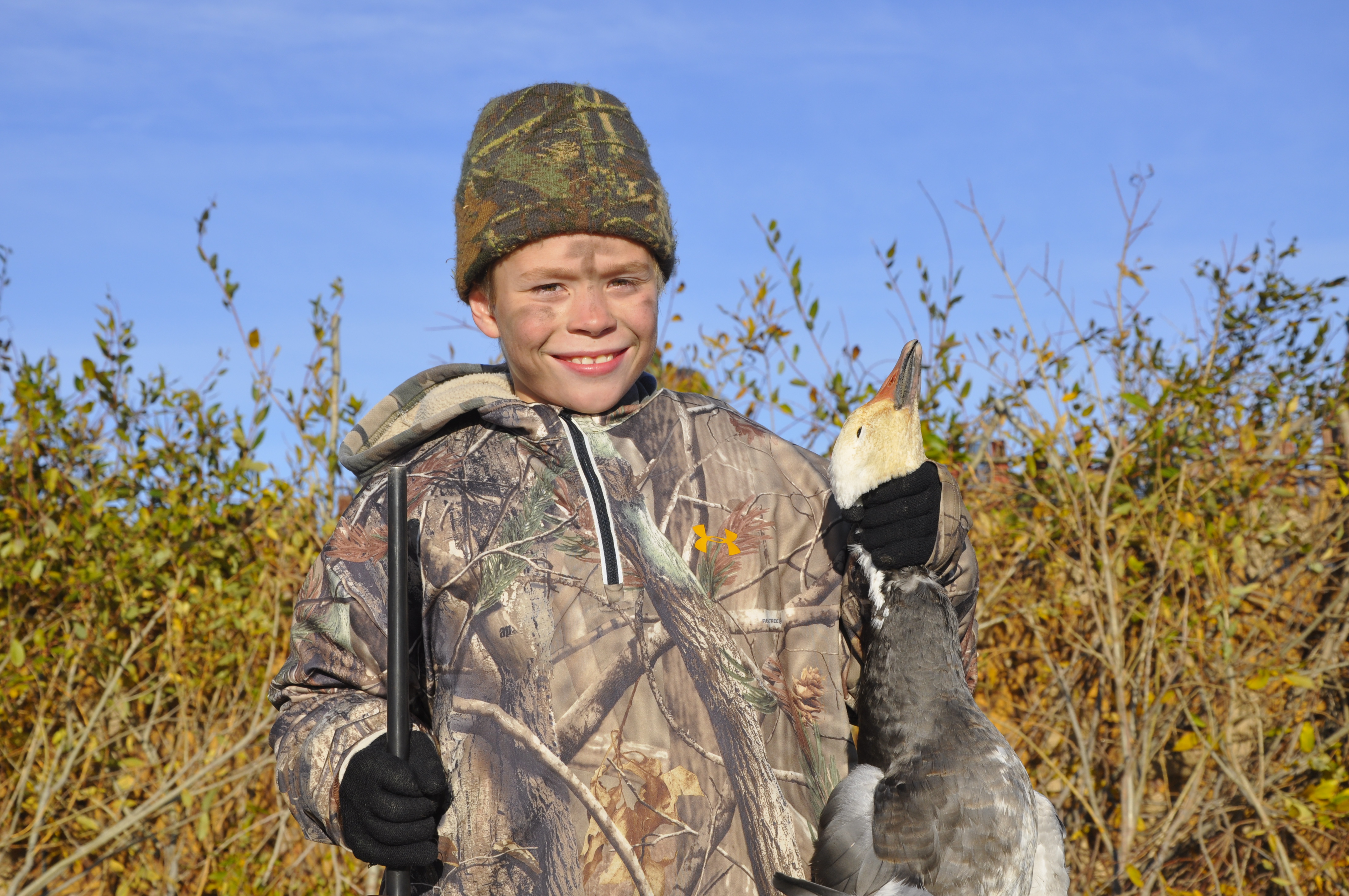 Then the fridge endeavours and pics.