Left work around 5 PM on Friday and headed down southeast of Calgary to roughly Carseland (just west of the Siksika Indian Reserve) with cousin Chris McManes, his son Caiden, Uncle John and Mike Horn. We got to a field right along the highway that had a field with about 2,000 whites and 2,000 speckle bellies. On the north side of the road was a farmer spreading manure in a baled pasture and south of the road was a full section of barley with a large slough in the south east corner. Running right through the middle of the field were train tracks – very convenient.

Their were about 500 whitefronts and 1,500 snows already along the tracks as we crept in to get between the birds and the water and as we not so silently crept west along the tracks, our front man, Mike put them up causing a temporary moment of madness above us. As I was walking 75 yards behind him, I didn’t really have a shot at any of the birds – except one. Had I been using my own gun, I wouldn’t even have shot as it was likely 60-70 yards from me, but since I was using Chris’ over-and-under I wanted to test it out!

Notorious for being soft, this greater whitefront crashed to the earth from what I can only imagine was a heart attack. When Caiden retrieved it back to me, I was in awe of how perfect the plumage was on the bird. The tip of the beak was white as snow with the rest of the beak filling in a deep, full orange to match his feet. The feathers around the face were stark white as well, and made a perfect circle around the front of the face. The bars on his chest were a full, deep black, which reminded me of the two my late Grandpa shot in the late 80s and still hang on a stringer in dad’s room at the Lodge. Clearly I’m still in admiration of these birds, they’re just so incredible looking, it’s almost too bad I shot it. Almost.

The information pulled from the certificate certainly explains why we don’t see many whitefronts in Manitoba. This bird was banded in the far north of Alaska, way out of the general flight path of our Scuttlebuck birds. It was hatched in 2006 (almost 8 years old), which would explain the full plumage and long toenails (which is really weird on a bird I might add). Lastly it was a “greater” white-fronted goose, which I didn’t know exist until the response from the USGS. We noticed it was noticeably heavier than the other spec I got that night, but didn’t figure anything of it. According to Andrew it’s a species we don’t get in Manitoba, but knowing he’s a Johnston is very likely is just making that up. 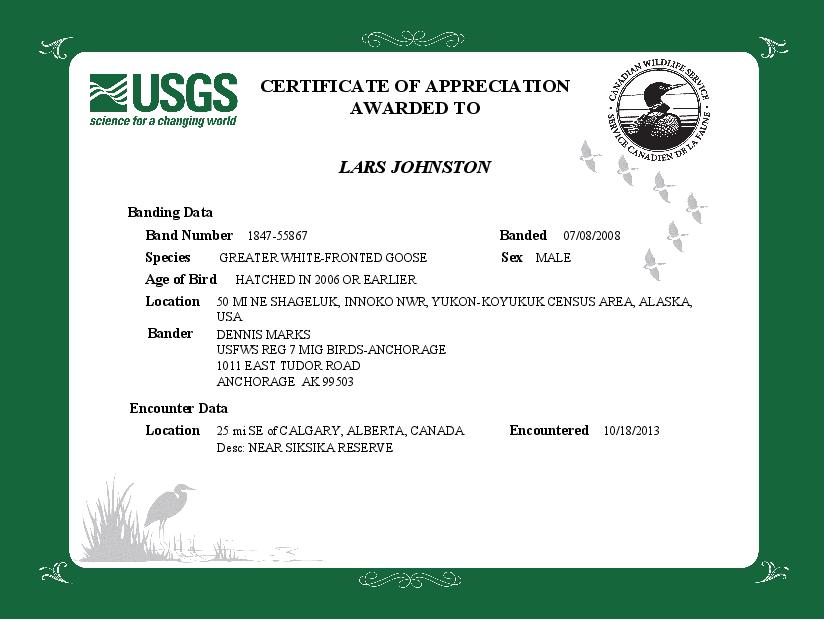 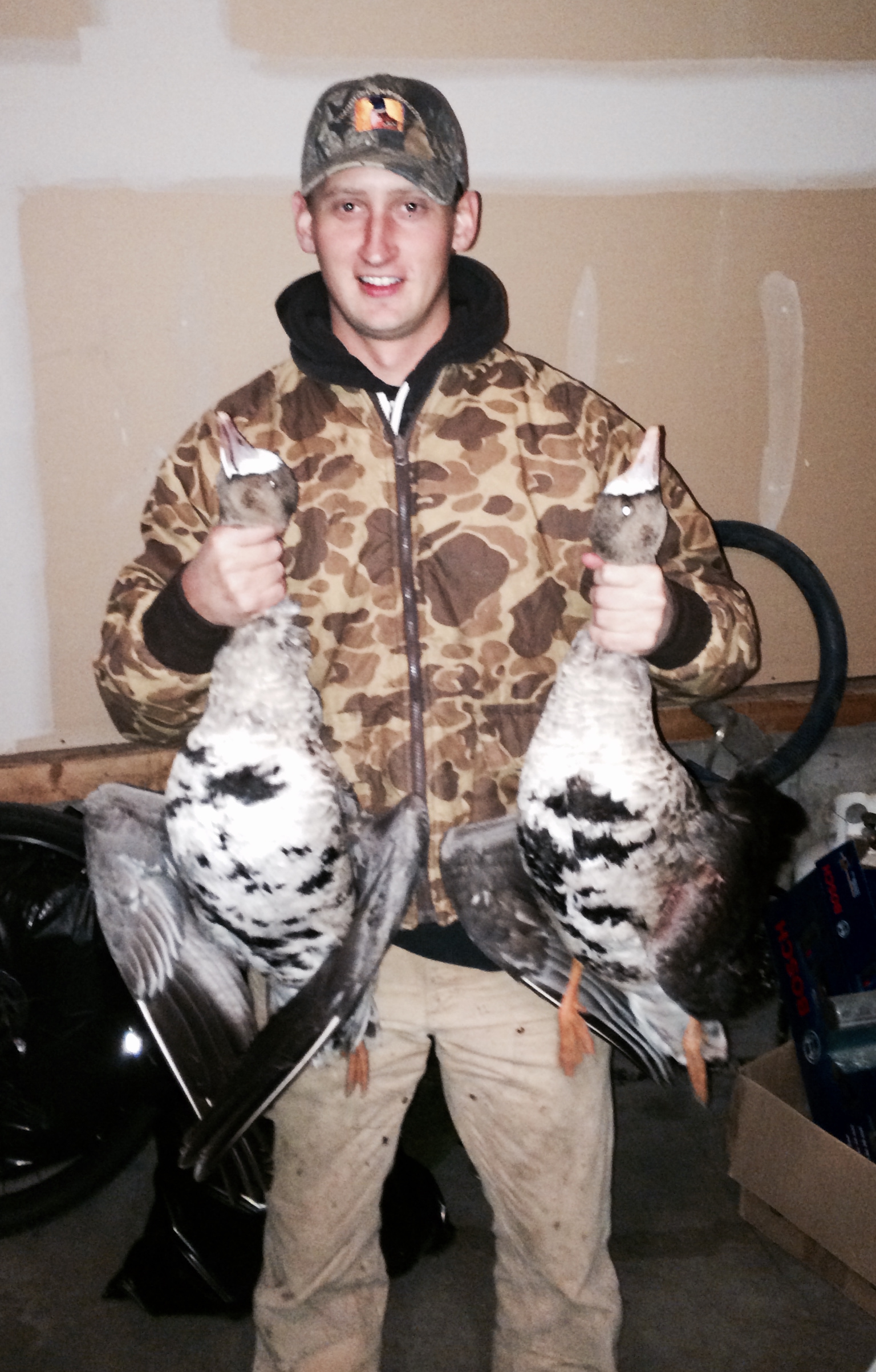 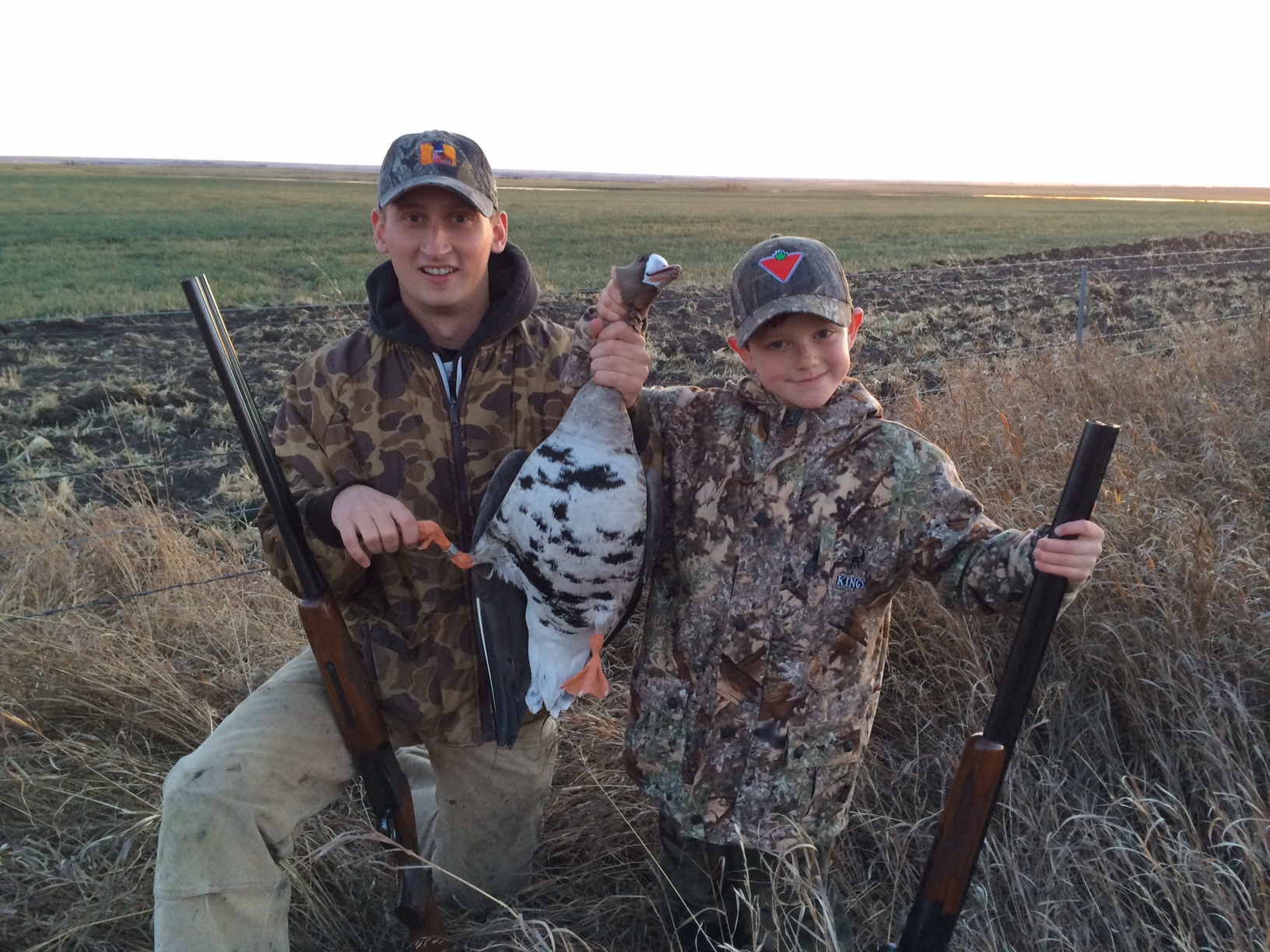