2011 was a very challenging year for hunters in Southwestern Manitoba. With the flood waters expanding the lake’s breadth to nearly double it’s regular size, crop and farmland in general was difficult to come by.

Now don’t let that give you the wrong impression of the year! Our harvest numbers were outstanding by any measurement (3rd best year in history) with the biggest difference in this year’s harvest coming down to a new found affinity for stalking the big geese.

In 2011, SBL had 43 honkers added to the Harvest Chart, more than double any previous year and accounting for over 35% of The Lodge’s 31 year history! As you can imagine, there were some monsters harvested this year.

The highlight of the year was definitely the Thanksgiving hunt (pictured below). Over 50 ducks harvested on Thanksgiving Saturday was a Lodge record not to mention so outstanding shooting by Larry Wallace who personally limited in only a few hours in the field. 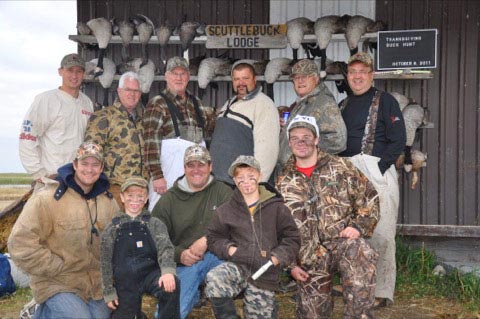