It was a lovely Sunday in late April, 2015 when Wayner and I decided we would knock the rust off of our Benellis, and try to put some turkey on the table. Even though Bubba is no stranger to hunting in Manitoba, he had yet to shoot an Eastern Wild Turkey. This can be a somewhat tedious task, especially for a man as grand as Wayne, since wild turkeys have phenomenal eye sight and can be described as leery, at best. However, a camouflaged ground blind helped tip the odds away from our keen-sighted adversaries.

Working in Portage has allowed me to form some very valuable relationships with local farmers. In particular, the owner of a large dairy operation, who has noted a large flock of turkeys on his land over the last several years. He was gracious enough to allow me onto his land to take a big ol’ tom last spring, and extended the same offer this year. He noted strong turkey numbers this year, and he suggested I bring a friend along as well, to help thin out the population. Naturally, when I heard ‘thin’, I thought of Wayne.

As planned, we were all set-up in (what we thought was) a good spot, just before sunrise. However, when I said ‘knock the rust off our Benellis’… perhaps Bubbs should have maybe tried that at home before the hunt, as his choke tube was seized in the half-way threaded position and temporarily rendered his gun useless. I promised Wayner that I would put him on a turkey, so our group hunt transitioned to a guided hunt, and he used my gun for the remainder of the day.

We had a scouting report from the land owner, stating that the turkeys tend to roost in trees to the East, and make their way to his dairy operation to the West to feed on the silage. We chose to set up on a long field of naturalized grasses between the apparent roosting and feeding locations. After an hour of watching the sun climb through the trees, and anxiously turkey-calling to no avail, we finally saw movement in the bluff line at the edge of our field. Unfortunately, it seemed as though we were actually deer-calling, as 9 does decoyed right into our spread and came within throwing distance. 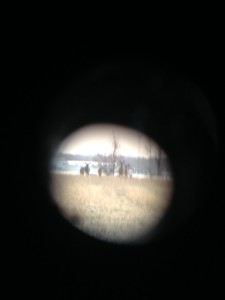 One gal took exception to us, and let us know with a series of huffs and stomps. I figured this was not advantageous for us, so I exited the blind and chased them out of the field. While I was up, I decided I would take a gander at the dairy operation to see if perhaps we had missed the migration from the roost to the silage. Sure enough, after the mile-long trek to the dairy, I spotted 6 large turkey silhouettes making their way to feed. Wayner and I packed up our gear and moved to where the turkeys were. 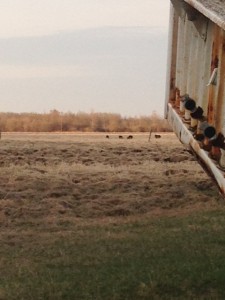 Shortly after sneakily setting up our blind approximately 150 yards East of where the turkeys were feeding, we spotted a big red fox. He was straight out in front of us, and proved that we were not the only hunters that day. Through binoculars, we watched him hunt the long grass and he caught a partridge! It took a lot of counselling to talk Bubbs off the trigger when the fox came within range. I think Wayner was more interested in the partridge than the fox, but nonetheless, we allowed them to pass unscathed, as to not disturb our turkeys.

We were able to catch intermittent glimpses of the group of turkeys at the dairy as they milled around the silage piles. There were 6-7 of them, but the group appeared to be made up of entirely hens. We were unable to elicit the heart-stopping ‘GOBBLE’ from any of them with our calls, and could not see a fan or beard in the group. Eventually, the gals decided to head back for a late-morning nap, and they made their along a fence-line about 40 yards in front of us, and into the bush. Once they were gone, Wayne and I decided to re-locate our blind to the fence that they adhered to when leaving.

Not long after moving our blind for the second time, a large, round, black silhouette crossed over the road at the end of the field, coming in our direction. This bird was so magnificent, Wayne thought it was a big dog that crossed over the road, rather than a gobbler. However, that tom wanted nothing to do with us, as he took a few uninterested glances in our direction, flared his fan a few times and made his way back across the road. Luckily though, he treated us to a few hearty, but distant, gobbles before leaving. Watching Wayner ride the emotional roller coaster was truly something to be seen. Seeing the exciting glimmer in his eyes when we heard the first gobble compared to the glistening tear in his eye as the tom left, made guiding just as exciting as actually hunting.

All of that excitement had me tuckered out, so I decided to leave Wayne on watch-out duty and found slumber in the grasses behind our blind. As you can imagine, I faced ridicule for this. My nap was short-lived, though, as I woke to “Saw. Saw! MATT!! THERE’S A TURKEY!”. I felt like a father being woken up on Christmas morning by his son telling him Santa was there. I rolled over and drowsily crawled back into the blind and glassed the unmistakable golden and brown fan of a tom turkey at about 200 yards. Bingo. Nap time was certainly over. It was now turkey time. 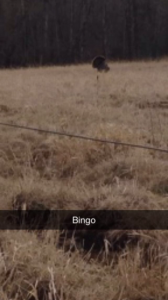 I put in my diaphragm mouth call and gave him my best hen call. He looked right at our 2 hen decoys, gave us a gobble or two back and started towards us on a line. However, our calling helped draw 2 actual hens out of the trees from our left, which grabbed our tom’s focus away from us. The 2 real hens were very vocal, and were fighting us for the tom’s attention. Calling immediately after their calls was about the best calling-practice you could get, as we tried to closely mimic them.

The sight of a strutting tom is an incredible sight. His head went from a dull whitish-purple to the brightest blood-red that you can imagine, and then back to purple. His fan was impeccable, and his fluffed chest and waltz-like movements sparked an adrenaline rush. He was definitely interested, and was working hard to impress his future damsels (plastic, or otherwise). He began to head towards the real hens, but lucky for us, the real hens started towards our decoy hens. After an excruciating 20 minutes of calling and watching, trying to fight off the adrenaline and remain motionless, the hens were walking along our side of the fence line, straight toward our blind, about 30 yards out. The tom had made his way across the field and was also walking along the fence towards us, roughly the same distance away, but about 5 yards on the other side of the fence. I carefully pulled out my video camera and began taping. I knew Wayne was about to experience something completely surreal as he readied the shotgun towards the tom.

The tom continued to strut hard as he walked towards us. Binoculars were no longer required to see his beard, his eyes, his spurs, his gorgeous fan, his incredible fire-engine red head and neck. It was incredible. Even though Wayne had the gun, I was overcome by gobbler-fever and my hand began to shake while video-taping this oncoming tom.

— “I CAN’T SEE HIM!” a frantic Wayner whispered to me. The angle that Wayne was on while looking out the front window of our blind prevented him from seeing the very close Gobbler approaching from the side.

I ripped the side window open to see what happened. I guess Wayne had leaned forward in his chair, and he said that all he saw was a bright-red head with 2 beady eyes looking back at him from the end of his barrel and then it was all over. Out the window, all I could see was a cloud of smoke and a motionless pile of feathers laying 11 short paces away. He was so close, I was about to reach for my knife to give to Wayne instead of a gun.

There we were, laughing and cheering like a couple of kids, hugging and high-fiving , when Wayner suddenly pushes me out of the way, rips the zipper open and runs out of the blind. I honestly though he was losing control of bodily functions. He was pulling up his pants as he took off on the short run for his bird.

“Oh… well on all the hunting shows in the US, they run out and jump on them to prevent them from flapping around.”

There was zero flapping.

Wayner had placed a perfect neck shot with a 3 1/2″ – 5shot – 3oz. turkey load at 10 yards. We engaged in a 20 minute photo-session with Wayne and his bounty, and then went to clean the meat. It was a successful hunt, which turned out exactly as planned. I know that I won’t forget this day any time soon, and I know that Wayne won’t either.

One funny, but really sad footnote — once we had cleaned the turkey and put the meat on ice, we didn’t want it to over-heat in Wayne’s truck while we headed back out to try to shoot another bird for myself. So we tucked it under the back tire of Wayne’s truck, in the shade, well wrapped up in a zip-loc bag inside of a black garbage bag. Well I’ll be damned if the neighbour’s dog from down the lane doesn’t come over, sniff out the meat, and take off with Wayne’s bag-o-turkey. If we had realized at the time what the dog had in his mouth as he pranced away from the dairy, we would have had a lot more cleaning to do.

Sorry for the long post, but I hope you had as much fun reading it as we did experiencing it. Stay tuned for the pictures/videos!

I also hope everyone wintered well and look forward to seeing you all again in a few short months. Except you, Dinger, I’ve seen enough of you.